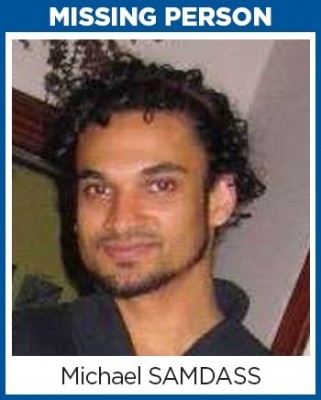 Michael Samdass was reported missing by his family on September 3rd, 2019, but he was last seen on Yonge Street in Toronto on Sept 5, 2019. Michael has connections in several Ontario cities, such as Hamilton, Sudbury, North Bay, Brantford, Toronto and Niagara. He is also known to go by Wesley or Michael Dass.

This is out of character for him and is concerning to his family, friends and Hamilton Police.

Michael is described as 6'3", with a thin build, black curly hair, brown eyes and a medium complexion. He has a scar on his left leg and knee and a tattoo on his left upper arm of a tribal design.

Hamilton Police have exhausted all efforts to locate Michael Samdass and asking anyone with information to contact Detective Constable Chelsea Knowles by calling 905-546-2917 or Detective Sergeant Ben Thibodeau at 905-546-2907.