Hamilton Police Service Official Coat of Arms granted by Canadian Heraldic Authority (created by Her Majesty the Queen on the recommendation of Her Excellency the Governor General) November 15, 2007.  The Coat of Arms is a version of the national coat of arms for municipal police services. It may be granted to any municipal Police Service which is part of a municipal corporation that possesses a coat of arms by lawful grant from the Crown. All such ‘badges’ share a frame of gold maple leaves rising up from a representation of the provincial flower from the province in which the service is sited, all ensigned by the Royal Crown. 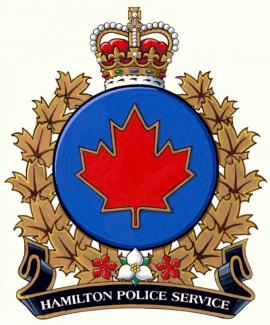 On a hurt a maple leaf Gules fimbriated Or, all within a wreath of maple leaves Or issuant from a trillium flower proper between two cinquefoils Gules, the whole ensigned by the Royal Crown proper and in base a ribbon Sable edged Or inscribed HAMILTON POLICE SERVICE in letters Argent;

There are many symbolic meanings to various parts of the Hamilton Police Service Coat of Arms. The exterior frame of maple leaves, the trillium, and St. Edward’s Crown follows the traditional style of police coat of arms for an Ontario municipal police service.  The Police Service has the responsibility of upholding the peace and the administration of justice under the Canadian Crown.  The Royal Crown, at the top of the coat of armst, symbolizes the administration of Crown’s justice, while the laurel of maple leaves and trillium refer to Canada and Ontario respectively.  The blue field represents the harbour of the City of Hamilton and the gold edges represent the City’s industry and wealth. The Red Maple Leaf represents Canada.  The two cinquefoils allude to the arms of the City of Hamilton in which such a cinquefoil also appears. The cinquefoil is taken from the arms of the Chief of Clan Hamilton, and it thus refers to the City's namesake.

The Governor General of Canada 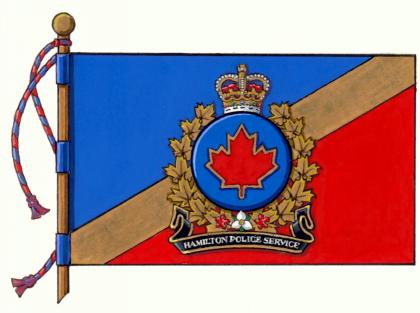 Flag
Per bend sinister Azure and Gules a bend sinister Or overall the Badge;
The symbolism of this emblem is found in other element(s) of this record

Consecration and Trooping of the Colours

It was on May 12, 2008 that a special event was planned to unveil the Hamilton Police Service Grant of Arms and the Consecration and Trooping of the Service’s first-ever Police Colour. The Grant of Arms, more commonly known as a Coat of Arms incorporates symbolism reflecting the years of history and heritage of the Hamilton Police Service. A ‘Colour’ is the ceremonial flag, with a specific registered design, awarded to the Hamilton Police Service by the Queen through the Governor-General and the Canadian Heraldic Authority. The design incorporates very specific symbolic features.  To consecrate a flag is to ceremonially dedicate it to the service of the men and women, officers and civilians, of the Hamilton Police Service. The consecration making the flag a visible symbol of the years which have passed since the Service was created, and emblematic of the years to come. It is meant to serve as an inspiration for the future, and is a silent challenge to the future members to meet and exceed the achievements of those who have come before them. In a ceremony steeped in protocol and pageantry, the colour was consecrated by a drumhead service.

The Police Service Logo, similar to our Heraldic Crest, was developed by a Police committee when the Hamilton-Wentworth Regional Police became the Hamilton Police Service.  It is the logo that appears on our marked Patrol Vehicles, signage, letterhead, etc.

The Governor General of Canada

History of the Hamilton Police Service