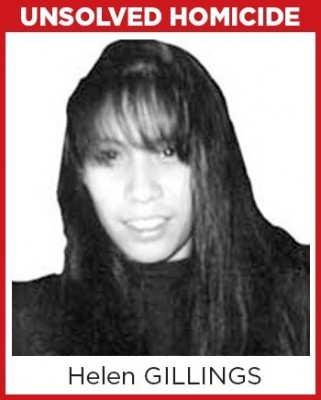 Helen Gillings was 19-years-old at the time of her murder and frequented the area of King Street East and Emerald Street North in Hamilton. She was a sex trade worker working in the area and often attended a former bar called the Straw Hat at the corner of King and Emerald Streets.

At approximately 5:00 p.m. on Friday, February 17, 1995, Helen’s body was discovered in an alley behind 483 King Street East. Her body was found a short distance away from Emerald Street North and the former Straw Hat Tavern. Helen had been last seen alive on Thursday, February 16, 1995, at approximately 1:00 a.m. when she left the Straw Hat Tavern and entered the alley with a male. Through extensive police investigation this male has now been identified by police.

Police believe there are people who have information regarding this homicide and that this information may assist in solving this murder. The Hamilton Police Service Board is offering a $10,000 reward for information leading to the arrest and conviction of the person(s) responsible for Helen’s murder. Anyone with information in encouraged to contact the Major Crime Unit at (905) 546-3801 or Crime Stoppers at (905) 522-TIPS (8477).