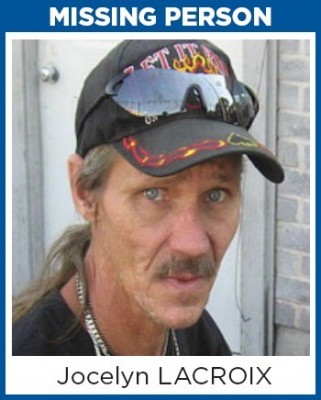 Jocelyn Lacroix was reported missing by a friend who had not seen him in over a month. Mr. Lacroix was last seen on June 24, 2010 when he was dropped off by a friend to pick up a prescription at a medical clinic. The clinic reports that Mr. Lacroix appeared for his appointment but missed his next appointment on July 13, 2010. Lacroix has numerous physical ailments and mental disabilities, including a severe drug addiction.