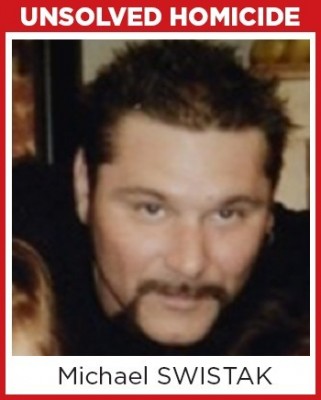 At about 8:15 p.m., on April 6, 2012, the suspect attended an active ‘crack-house’ located on Madison Avenue in central Hamilton. A female came to the door but didn’t recognize the suspect, so he was refused entry. At this juncture, a male came to the door and told the suspect, in no uncertain terms, to leave the property. As this verbal confrontation was occurring Michael Swistak (the victim) arrived by coincidence and inserted himself in the discussion, to the point where he instigated some minor pushing and shoving to underline the fact that the suspect was not welcome there. The suspect left and headed north into the schoolyard of Cathy Weaver School, which is at the northern dead end of Madison Ave. As the suspect left, he was followed by Swistak and the other male, who continued to verbalize their disapproval of the suspect showing up. The suspect warned Swistak and the male to leave him alone and stated “you don’t want none of what I got”. Swistak and the male continued to follow the suspect who turned around, pulled a handgun from his front waistband and fired once at Swistak. The bullet struck Swistak and he fell to the ground; the suspect fled down the alley towards Sanford Ave. Police and EMS responded to a 911 call and Michael Swistak was transported to the Hamilton General Hospital where he succumbed to his injury.