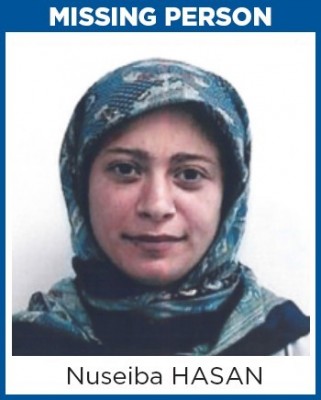 On February 12, 2015, a family member attended Hamilton Police with concerns as to Hasan’s whereabouts. The last time anyone has seen or heard from Hasan was in the fall of 2006 when a family member dropped her off at the family farm located at 1207 Concession 8 Road West in Flamborough. At the time of her disappearance, Hasan was residing with her mother and father. No one in the family had alerted police of Hasan’s disappearance for years. Police conducted an extensive search of the Hasan family's former property at 1207 Concession 8 Road West in Flamborough. Cadaver dogs, ground-penetrating radar, police on horseback and a drone have all been used to scour the rural 22-hectare property. A forensic anthropologist was also called in. To date, Hasan has still not been located and foul play is suspected.