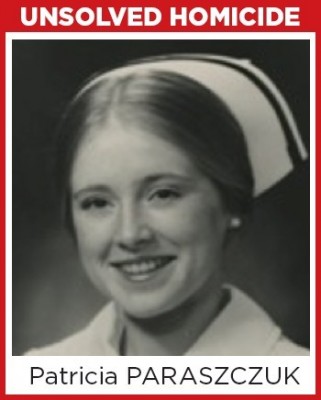 On the evening of March 3, 1982, neighbours noticed flames coming from the home of Patricia Paraszczuk. They broke down the doors in an attempt to rescue Patricia but were overcome by the fire. Hamilton Fire Department distinguished the fire and eventually found Patricia’s body. She had been strangled in an apparent attempt to stage the death as a suicide. The house was set on fire afterwards. Patricia was in the midst of a divorce at the time but unfortunately not enough evidence was produced to establish a firm suspect and make an arrest. Patricia was a popular smart young professional nurse who had her whole life ahead of her. Witnesses who were reluctant to come forward or tell the truth at the time are encouraged to do so now.

Anyone with information about this homicide is being asked to contact S/Sgt Dave Oleniuk in Major Crime at 905-546-3829.