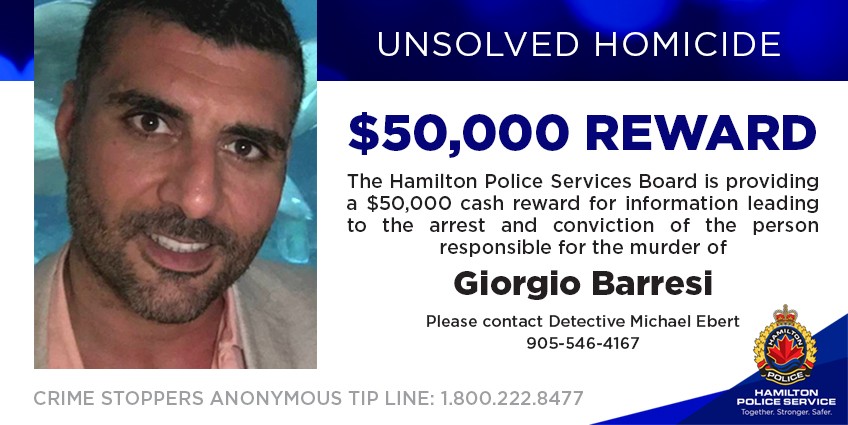 Hamilton Police are now offering a $50,000 cash reward for information leading to the arrest and/or conviction of the persons responsible for the murder of Giorgio Barresi.

On Monday, March 2, 2020, Giorgio Barresi was shot and killed in the driveway of his residence while his wife and children were inside their home.

The suspects arrived in a light coloured sedan and parked at the end of his street, waited for Giorgio to return home before a lone gunman approached and murdered him. The suspects fled in the sedan to a nearby highway quickly fleeing the area before police arrived.

The murder of Giorgio was planned. It is believed that the suspects were aware of his habits and routines which afforded the opportunity to confront Giorgio at his residence that night.

Investigators believe that the actions of these suspects indicate that there are people within our community who know what happened to Giorgio that night and the events that led up to his murder.

Investigators are hopeful that the $50,000 reward will stimulate further leads and motivate individuals with knowledge about this murder to come forward.

Giorgio Barresi was a father of three children who he loved dearly and is now no longer here to witness their beautiful milestones.

With Father’s Day approaching this weekend, Hamilton Police are encouraging those with information to come forward and help us solve this murder, especially for his children.

If you have any information that you believe could assist Police with this investigation please contact Detective Michael Ebert of the Major Crime Unit by calling 905-546-4167. To provide information anonymously call Crime Stoppers at 1-800-222-8477 or submit your anonymous tips online at http://www.crimestoppershamilton.com