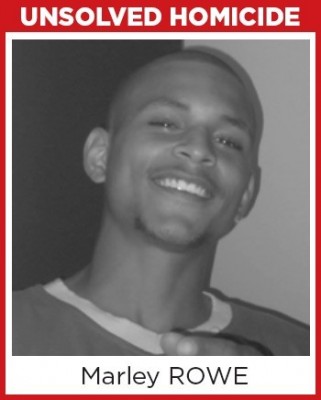 At about 4:40 a.m., on January 1, 2014, HPS Officers and EMS responded to several 911 calls about a shooting near a residence on Sherman near Barton in Hamilton. About 50 to 60 people had been attending an ‘after hours’ party in a residence and a male had reportedly been shot in the back parking lot. Most of the people who had been in attendance fled the scene in order to avoid cooperating with the police. Those that remained included a handful of good Samaritans who were trying to perform first aid, and some people in the building who had been unaware of the situation. Marley Rowe was found to be the shooting victim and was transported to the Hamilton General Hospital by EMS but he was never revived. An extensive and ongoing investigation commenced; police are aware that there were probably several eye-witnesses to this crime, but these people have yet to come forward. Marley was not known to police. He was a hardworking and good natured young man who left behind a young son. This tragedy is also believed to be a case of mistaken identity as an act of retaliation for an earlier incident.

HPS continues to investigate this matter and a reward of $50,000 is available to the person who comes forward with information that leads to an arrest (or arrests).