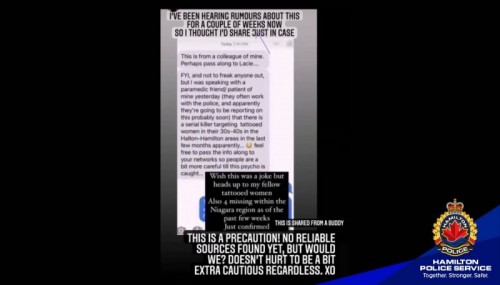 Hamilton Police are aware of a viral social media post circulating alleging an ongoing investigation into a serial killer in the Hamilton-Halton area. Anyone with information regarding these posts are urged to contact police.

Investigators can confirm there is no evidence to suggest there are connections between outstanding missing persons in Hamilton or our neighbouring police services at this time.

Hamilton Police continue to appeal for information on missing person Stacie Raspberry, who was last seen in Niagara on February 19, 2022. Investigators have been able to confirm Stacie received medical assistance and checked into a shelter under the name Sarah Marlowe. Stacey was wearing a black coat, red toque with a pom pom, pink scarf and brown boots with fur around the top.

The Hamilton Homicide Unit is also looking into the disappearance of Emily Bailey. On Monday, January 10, 2022, Emily was reported missing after her friends and family were unable to locate her. This was out of character for her. Emily was last reported to be attending a New Year’s Eve party on Weir St N. before leaving an acquaintance’s house the next day. She has not been seen or heard from since that time.

Investigators believe there are individuals who know what happened to Emily and encouraging those people to come forward to police.

Anyone with information regarding the social media post is urged to contact Missing Person Coordinator Detective Constable Kim Walker at 905-540-6477.

UPDATE: Have You Seen Stacie Rasberry?