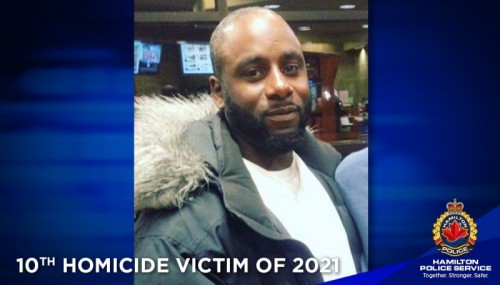 Hamilton Police continue to investigate the City’s tenth homicide of the year.

On Sunday July 18, 2021, shortly after 9:46 a.m., Hamilton Police responded to reports of an injured male lying on the sidewalk near 575 Queenston Road, Hamilton. Officers arrived on scene shortly thereafter and located a male suffering from stab wounds. The male was rushed to hospital, where he was pronounced deceased.

The victim of this murder has now been identified as, 40-year-old, Christopher La Rose of Brampton. A post mortem examination is scheduled for today in Toronto.

Investigation has revealed that this incident occurred at a motel situated in the east end of Hamilton. An unidentified suspect attended a unit in the motel, where La Rose was visiting and engaged in a physical altercation with him. La Rose was stabbed during this attack and fled on foot eastbound on Queenston Road, where he collapsed a short distance away. The suspect fled the area prior to police arrival.

Police believe this to be a targeted attack and are reviewing area CCTV video in an effort to identify those people involved.

If you have any information that you believe could assist police with the investigation into this crime, you are asked to contact Detective Andrew Coughlan by calling 905-546-3874.