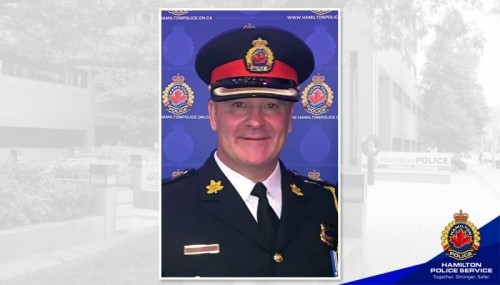 “This is an exciting day for our service and concludes an extensive recruitment process that involved diverse candidates from both in and outside of Canada, to determine the best individual to support us in fulfilling our mission to serve and protect the citizens of Hamilton in partnership with our communities,” said Chair Eisenberger.

Deputy Chief Hamilton is a 31-year Hamilton Police Servicemember, most recently in the position of Acting Deputy Chief of Support Services and prior to that working as Superintendent in the Investigative Services Division. He has been a command lead on a variety of multi-jurisdictional major case management investigations that have included domestic and international law enforcement agencies. He is committed to further enhancing community-based policing and in building, fostering, and advancing strong and sustained partnerships within our various and diverse communities.

Deputy Chief Hamilton studied Sociology and Criminology at the University of Ottawa. He has been married to his wife Darcia for 25 years and they have raised two adult children in the Dundas Community.

“Paul is a welcome addition to our Command Team. Over his 31-year policing career, Paul has demonstrated his commitment to community safety and his ability to find innovative solutions to complex issues. His leadership will be important as we partner with the community to promote safety and well-being for all Hamiltonians” said Chief Bergen.