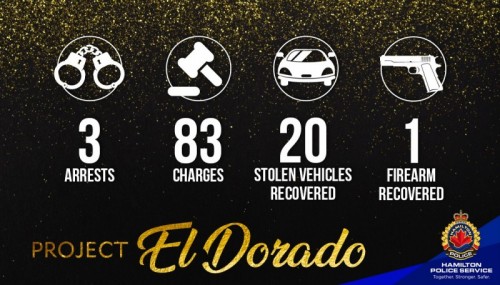 Hamilton Police have arrested three individuals after a two-month investigation into criminal activity involving stolen vehicles and more. The investigation, dubbed Project El Dorado was conducted in partnership with the Insurance Bureau of Canada and Niagara Police Service.

In May of 2021, Hamilton Police launched an investigation into an organized auto theft and chop shop ring.

The project took place at various locations in the Hamilton and Niagara Region.

All three males were released on their own recognizance and their first court appearance is August 12, 2021.