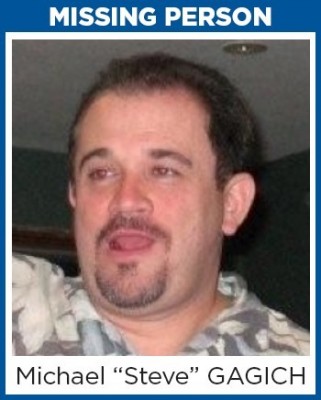 Michael Steven Gagich departed his residence around 8:00 a.m. on September 6, 2009, and left a note for his parents indicating that he was leaving for the weekend. Mr. Gagich's vehicle was located on Tuesday, September 8, 2009, at approximately 7:15 p.m. when a passing airplane observed a fire. The vehicle was located in a remote area on Emmett Lake Road in St. Edmund's Township and was completely burned by the time the fire department arrived. Mr. Gagich was last seen at the Tobermory Ferry Terminal on Wednesday, September 9, 2009, at 7 a.m. It is not known if he purchased a ticket to board the MS Chi-Cheemaun ferry, which provides transportation for vehicles and persons from Tobermory to South Baymouth on Manitoulin Island.

Anyone with any information is being asked to contact the D/Sgt Victims of Crime Unit at 905-546-4962.